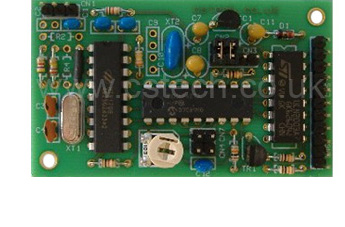 Optional Morse transpond gives feedback that command has been actioned

Our DTMF Decoder kit has 6 NPN open collector Darlington outputs that you can switch on/off, pulse or toggle remotely with or without a 4 digit security code.

TX keying output to key a transmitter for transponding a Morse confirmation. You also have an Audio output for the Morse audio tones.

You can also use it as a DTMF to PC interface allowing DTMF tones to be displayed in, for example, HyperTerminal (see below).

PLUS on the latest firmware, you can now use 9 for A and 8 for B so 12 key pads can be used. See the kit in action in this video:

When you want confirmation of the desired switching of an output the decoder will key a Transmitter and respond in Morse code; turning on output 1 will respond as 1 ON in Morse, and turning off output 2 will respond as 2 OFF. Simple.

And as there are only 6 digits and 3 letters to learn, there’s no need to let Morse put you off. There is a 2 second transpond delay followed by a 400ms link establishment delay to allow for CTCSS (if used).

Sending the turn off code for the dummy output zero e.g. 12340# will transpond _._._ OFF but won’t affect any outputs. This is useful for checking if in radio range.

If you want to use the kit for DTMF to serial, program the ID as 2320 and next time it’s switched on decoded DTMF tones will be output as RS232 (4800 baud 8N1) compatible serial on the TX keying output; fit the pull-up resistor R12 for this use.

The PCB is a high quality double sided PTH (plated through hole) 1.6mm FR4 (Fiberglass) board 64 x 38mm in size.

A 4 pin programming header is also provided to allow in-circuit re-programming of the PIC.

TURN OFF THE MORSE TRANSPOND

WHAT’S IN THE BOX?

Simply fit a jumper to CN7, turn on the decoder and send it a new 4 digit ID with DTMF. Then turn it off, remove the jumper and switch on again. The new ID is set. If you do not require an ID then simply program the ID as 0000 and on next power-up no ID will be needed and e.g. 1* will turn on output 1.